You are here: Home1 / Picasso 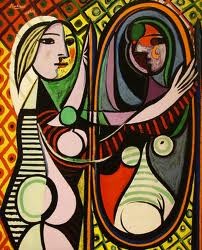 Imagine what life would be like if everyone simply followed in the footsteps of those who preceded us. Isn’t it in fact the willingness and courage to try something new and different that personifies true entrepreneurship? As an attorney who advises business entrepreneurs, I often see my clients succumb to the impulse to “stick with what’s always worked.” Stated otherwise, they opt for the “tried and true” path rather than thinking outside the box for innovative concepts and solutions.

How different – and frankly boring – the world of art would be if artists like Picasso had been unwilling to move beyond their classical training and instruction. The image on the left above was painted by the artist as a young man. Without question, the woman portrayed is a magnificent example of classic portraiture, exhibiting Picasso’s mastery of imagery and light. And there’s little doubt he would have been a success had he just stuck to “traditional art.”

And yet something within the young Pablo compelled him to look beyond the popular conventions of late 19th century culture and visualize a world no one else had ever imagined, much less seen. In so doing, he left the comfort of what he knew he could do, and dared to blaze a new path by trying something neither he, nor any of his role models had ever tried before. As he himself wrote, “I am always doing that which I cannot do, in order that I may learn how to do it.”

Many critics of the time were aghast at the 19 year-old artist’s work. Of Picasso’s 1900 exhibition in Paris, Carl Jung wrote, ““The picture leaves one cold, or disturbs one by its paradoxical, unfeeling, and grotesque unconcern for the beholder.” The brilliant impressionist Paul Cezanne suffered similar disdain: “Mr. Cézanne merely gives the impression of being a sort of madman, painting in a state of delirium tremens.” Both artists are now universally acknowledged as groundbreaking artists whose influence continues to the present day.

Transferring these notions to the world of business, truly innovative entrepreneur must have boldness to be willing to re-imagine their industry or profession in ways not previously considered. Yes, it is important to have the solid foundation of basic business models and concepts before we launch ourselves – and our companies – into the unknown. In similar vein, no one can dispute that stepping outside the established traditions has a higher risk of failure.

Even the most daring entrepreneur should thoughtfully weigh the potential risks and benefits of whatever concept or strategy one attempts. Seeking counsel from trusted and skilled professional experts in the legal, financial or other appropriate arena is always imperative when contemplating “breaking the mold.” To do otherwise would be foolhardy rather than innovative.

Beyond the realm of art, where would we be today without Thomas Edison? Henry Ford? Steve Jobs? Oprah Winfrey? Richard Branson? A common denominator among them is their ability to use their unique vision and creativity to imagine what their predecessors could not.

Think of the person you most admire for having challenged the status quo and fundamentally changed the paradigm of the business arena in which she or he operated. And then ask yourself: Is the way I run my company, how I communicate what I do, mired in the safe, the predictable? Is it possible that by injecting a little more “right brain” creativity and passion, I could truly inspire my customers, my employees, and my community to flock to my door?

Going against the grain. Inverting business models. Doing the “impossible.” From the point of view as a business attorney, these are the kinds of client I live for, and with whom I love to work. It allows me to challenge and counsel them while at the same time being inspired to evolve and grow.

Irrespective of what you do in life, the willingness to think creatively and outside the norms gives you an edge many others will simply never have. What the leaders of innovation truly teach us, if we’re willing to listen, is that the ability to achieve genuine and lasting success is limited only by the boundaries we create for ourselves. Dare to be different.