You are here: Home1 / Operating Agreement 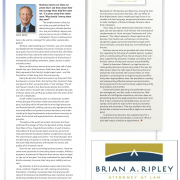 We are proud to announce that the Oakland Metropolitan Chamber of Commerce recently featured us in the September issue of the Oakland Business Review special section entitled, Law Offices of Oakland.

The article highlights how business owners often overlook succession planning when they first start out their businesses.  The reality is you can’t plan your path without first determining your ultimate destination. Are you building a company to pass down to your children or employees? Are you creating a business to be sold to a stranger? Without understanding your intention, you can’t develop or implement strategies and actions necessary to reach your goals. Nearly 80% of business owners say they want their businesses to survive them. And yet less than 25% have any type of written succession plan or “exit strategy”.  The all too frequent result is that businesses devolve into conflict and chaos when a founder dies, becomes disabled, or when business partners fail to share the same vision. Decades of blood, sweat and sacrifice go quickly down the drain, all for want of a simple plan.

A well crafted succession plan is as important as determining the type of entity best suited for the company; utilizing contracts and agreements that accurately reflect and protect business decisions; and understanding the legal requirements and procedures necessary to retain the financial and legal protections a business entity provides.

By preparing for the ‘What Ifs’ before they happen, business succession planning improves the likelihood of your company weathering the storms and quakes of an uncertain world. […] Click here to read more.

Although RULLCA will not require existing LLCs to file any new documents with the Secretary of State or necessarily amend their operating agreements, it may be prudent to seek the advice of an attorney.  Particularly, older operating agreements that specifically reference Beverly-Killea should be amended to instead cite RULLCA.

Another change under RULLCA is that an LLC member will be bound to the operating agreement even if that member does not sign it.

These are simply a few examples of what to expect.  For the most part, RULLCA represents an improvement to the default rules and was intended to align California closer to the LLC laws of other states.  It is expected the Act will be “tweaked” further before its January 1, 2014 effective date.  Significant changes will be noted in future blog posts.

If you have an existing LLC and operating agreement, I would be pleased to review these matters with you to determine what changes, if any, are appropriate to ensure that your company will be compliant with the new Act.